In this edition, there's the latest on Cristiano Ronaldo and Paris Saint-Germain. Plus: Chelsea are watching Marc Andre Ter-Stegen's Barcelona contract talks with interest.

Cristiano Ronaldo has been linked with a move to Paris Saint-Germain this summer but sources have told ESPN that the club prefer to extend Kylian Mbappe and Neymar's contracts rather than finally sign a player they have coveted for years.

Both Mbappe and Neymar have contracts in Paris until 2022 and the club's priority is to extend both deals before they focus on incoming transfers. 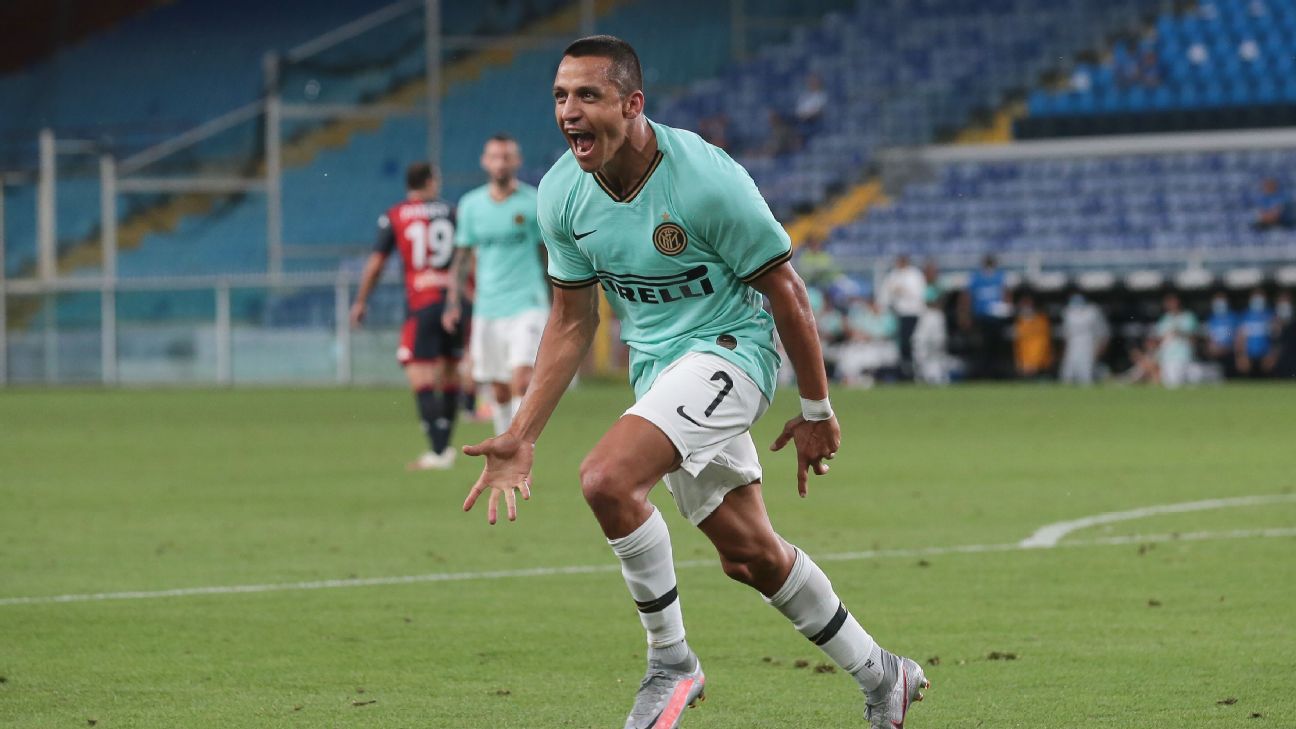 The Juventus forward could have joined PSG numerous times since the club were taken over by Qatar Sports Investments in 2011 and there was strong interest on both sides after Real Madrid won La Decima, the club's 10th European Cup, in 2014.

QSI's big dream upon taking control in Paris nine years ago was to attract Ronaldo to the French capital and they've tried many times, with big offers on the table. Jorge Mendes, Ronaldo's long-time agent, has been involved in discussions but Real Madrid's all-time leading scorer has yet to say yes to a move.

It was claimed in France this week that Ronaldo's stance had changed and that he was finally ready to move to Paris this summer but sources have told ESPN that is not the case. Ronaldo, 35, has two years remaining on his Juventus contract and his main concern is winning a third Serie A title in a row with the club. He also desperately wants to win the Champions League with Juventus, with the chance to make history by joining Clarence Seedorf as the only players to win the competition for three different clubs firmly on his mind.

Ronaldo would have been a perfect marquee signing for PSG, and at times under QSI's control they firmly believed they would be able to sign him. But after missing out in 2012, as the club instead signed Zlatan Ibrahimovic, as well as landing Neymar from Barcelona for a world record €220 million in 2017, PSG are ready to move on. -- Julien Laurens

Chelsea and Inter Milan have shown an interest in Marc-Andre ter Stegen's situation at Barcelona with the goalkeeper into the final two years of his contract, sources have told ESPN.

Both clubs acknowledge that luring Ter Stegen away from Barca is a long shot but want to position themselves at the front of the queue in case he fails to reach an agreement over a renewal at Camp Nou. Former Chelsea goalkeeper Petr Cech has taken on a significant part in their transfer operations since he was appointed to the role of technical and performance advisor last summer.

Sources explain that he played a major role behind the scenes in the deal to sign Timo Werner from RB Leipzig and he's leading the club's charm offensive for Ter-Stegen, who he views not only as an outstanding goalkeeper but also as a leader. ESPN's Mark Ogden has reported that Chelsea boss Frank Lampard has lost faith in No.1 Kepa Arrizabalaga -- who is the world's most-expensive goalkeeper, having cost £71m in 2018 -- and is on the lookout for a man between the sticks.

Inter, meanwhile, have also made contact with Ter Stegen's camp as they begin to prepare for life beyond Samir Handanovic. He will be almost 37 when his contract expires in 2021 and they have reached out to Ter-Stegen about the possibility of doing a deal next summer.

Ter-Stegen, 28, has always expressed a desire to continue at Barca, who he joined from Borussia Monchengladbach in 2014. He has developed into a key player at the club and feels at home in Catalonia with his wife and son.

However, while he is willing to make sacrifices over a new deal due to the financial effects of the coronavirus pandemic, he would still like his importance to the side to be reflected in any new contract and see signs that the club are building for the future with much of the first team's core having been there when they won their last Champions League in 2015.

Barca remain confident of tying him down to new terms, but reports this week that he's on the verge of a new five-year deal are wide of the mark at present. -- Samuel Marsden and Moises Llorens

The City boss wasn't best pleased with comments Torres, 20, made to Spanish newspaper Marca in an interview published on Wednesday, the day after his €23m move was made official. The Spain youth international took a series of parting shots, criticising captain Dani Parejo as well as targeting club officials and local journalists.

We look back at past Premier League transfers with a simple question: Who was the best signing in the history of the competition?
• Full list: 100-51 | 50-1

Torres -- a winger and widely regarded as Spain's best young player -- had a year left on his Valencia deal and was available at a bargain price, opting for City after being chased by a number of top European clubs.

The winger revealed he'd made three extravagant demands to consider staying: asking to become one of Valencia's top earners, to be made a club captain, and for owner Peter Lim to personally get involved in talks.

Sources told ESPN that Guardiola was made aware of the interview the day before its publication and was decidedly unimpressed with its contents. The coach believes such behind-the-scenes disagreements should remain private and feels it was unwise for Torres to reveal details of his acrimonious departure from his boyhood club at a time when he should be looking forward to life as a City player. -- Alex Kirkland and Rodrigo Faez

... and City boss unconvinced by Jesus

Guardiola wants a new striker at Manchester City, with sources telling ESPN that he is unconvinced that Gabriel Jesus can become a long-term replacement for Sergio Aguero.

Aguero, who will miss City's Champions League round-of-16 second-leg tie against Real Madrid on Friday following knee surgery in June, will be 33 when his contract at the Etihad Stadium expires at the end of next season and he has yet to give any indication over his future. He has a long-standing ambition to return to Argentina at the end of his City deal to play for boyhood team Independiente.

But while Guardiola can count on Aguero, City's all-time leading goalscorer, next season sources have said that the City manager is keen to recruit a proven striker.

Brazil forward Jesus has helped City to a host of domestic honours, including two Premier League titles, since sealing a £28.8m transfer from Palmeiras in January 2017 and the 23-year-old has scored a respectable 67 goals in 151 senior appearances for the club.

But there are concerns at City that the anticipated loss of Aguero in 12 months' time will leave the club needing an equally prolific striker to replace a player who cost just £35m from Atletico Madrid in August 2011.

Tottenham's £200m valuation of Harry Kane is likely to scare off potential buyers, with City not looking to spend such a huge sum on any potential signing.

But while Jesus's strike-rate is just short of a goal every other game, sources have said that Guardiola wants the club to identify a striker capable scoring as regularly as the likes of Aguero, Kane and Robert Lewandowski. -- Mark Ogden

Manchester United are monitoring the progress of Napoli goalkeeper Alex Meret, sources have told ESPN, with the Old Trafford club determined to have an array of options should either David De Gea or Dean Henderson move away from the club in the next 12 months.

De Gea remains manager Ole Gunnar Solskjaer's first-choice, despite a series of mistakes in recent months. The Spain No.1, whose contract does not expire until June 2023, will start the 2020-21 season in goal for United.

Henderson is likely to spend another season on loan away from Old Trafford, with the 23-year-old reluctant to return as a No.2 having enjoyed two full seasons of first-team football while on loan at Sheffield United.

Sergio Romero remains United's back-up keeper, but Solskjaer wants a young, emerging talent to compete for the No.1 spot and Meret is regarded as one Europe's most promising keepers by United's scouting team. The 23-year-old has been capped at every level from under-16 upwards by Italy, making his senior debut in the 9-1 victory against Armenia in November 2019. -- Mark Ogden

Willian is "upset and even offended" as his seven-year spell at Chelsea comes to a close, sources have told ESPN, as the player's camp believe the Blues did not try hard enough to keep him from rivals Arsenal.

The 31-year-old has signed a three-year contract at Arsenal, according to ESPN sources, following a tense stand-off with Chelsea. The midfielder wanted a three-year deal at Stamford Bridge but he was offered a "take it or leave it" two-year contract before the coronavirus pandemic, sources have told ESPN, with no meaningful negotiation since then.

Chelsea boss Frank Lampard was also keen on keeping a player who has been key to the club's success since his arrival in 2013, scoring 63 goals and providing 62 assists in 339 games, while helping them to two Premier League titles, one Europa League, one FA Cup and one League Cup.

However, Willian's camp felt that it was clear Chelsea didn't really want him to stay, so he had no option but to look elsewhere to continue his career.

His priority was to stay in London as his family is happy and settled there. Arsenal not only matched his demands but offered him the possibility to reunite with his friend David Luiz and continue playing in Europe, after the Gunners beat Chelsea in the FA Cup final to secure a spot in next season's Europa League. -- Joao Castelo-Branco

Smalling could yet have United future

Chris Smalling could yet have a future at Manchester United following a successful loan spell at Roma, sources have told ESPN, with Solskjaer open to the prospect of keeping him at the club.

The defender is expected back at Old Trafford after his loan in Italy came to an end and he said he was "gutted" he couldn't continue at the club.

Roma tried to negotiate a short-term extension which would have allowed Smalling to play in their remaining Europa League games -- and possibly against United in the semifinals -- but United refused.

After Smalling played so well in Italy, Solskjaer is open to keeping the 30-year-old as part of his squad for next season. But that will depend on Smalling being satisfied with the prospect of fighting for his place with Harry Maguire, Victor Lindelof, Eric Bailly and possibly a new arrival, when weighed against finding more regular first-team football elsewhere.

Smalling still has two years left on his contract and sources have told ESPN that if a realistic bid was submitted, it will be considered. -- Rob Dawson