We're heading into the knockout rounds of the 2019 FIFA Women's World Cup, when games are settled not with draws or VAR but with a good ol' penalty shootout. You know the rules by now, right? Two teams line up, and individual players take turns shooting at the goal. The keeper dives to a side, and sometimes gets it right. If the teams are tied after five kicks, they each take turns until one team finishes with more.

With the round of 16 kicking off Saturday at 11:30 a.m. ET, we look back at every shootout in the history of the Women's World Cup and Olympic women's soccer tournaments, the two major women's soccer world events, to see what history tells us.

Out of those 10 shootouts and 105 total shots taken over that span, we boiled down the shootout to its basic events. Shooter versus keeper, goal or save. Now, most games will never sniff penalty kicks, but two championships have been decided on PKs, 1999 and 2011. And, in those situations, teams will want their most accurate shooters and agile keepers.

Order of play: The unlucky 5 spot

Teams tend to put their better shooters early in the lineup, while leaving their best scorer in the 4 spot, where they have been nearly perfect with a 95% success rate. Over the years, the 4 spot has been home to prolific scorers such as Mia Hamm, Abby Wambach, Saki Kamagai and Wendie Renard. What's going on in the 5 spot, though? Whether it's nerves, or just good keepers, the 5-spot shooter has converted barely half of her kicks. And star players have fallen prey to this -- just ask Brazilian striker Marta, who shot fifth in the 2016 Rio Olympics and had her shot saved in a semifinal loss against Sweden. 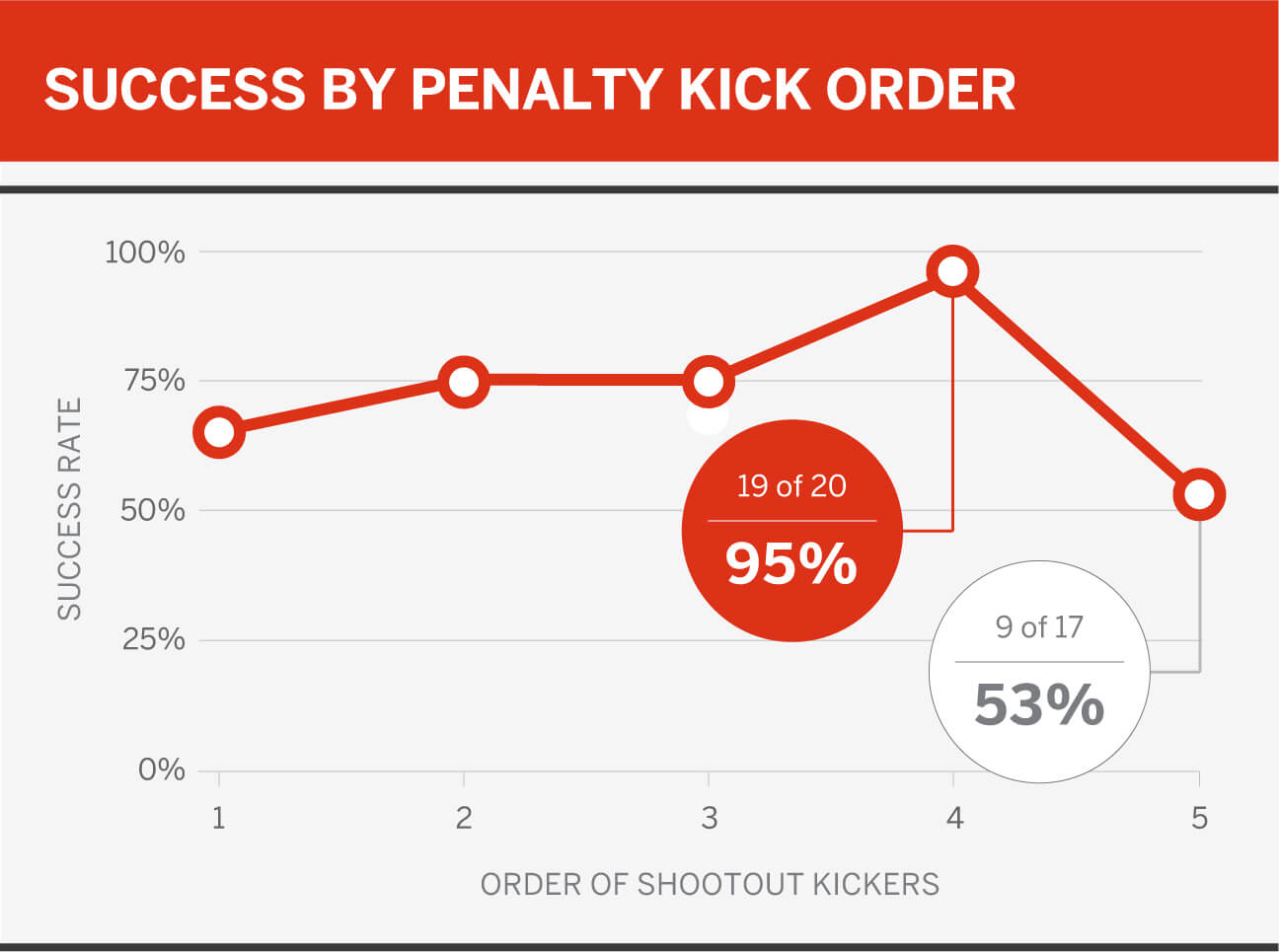 Watching a shootout, you'd think the keeper has an impossible task. The net is so wide, the ball is so close, the kick is coming in so fast. Keepers have to make a split-second judgment on where to dive before even seeing where the kick is headed. The one thing you don't want to do, according to the data: stick to the middle. Keepers guessed correctly on two-thirds of kicks to either direction, but had the worst rate on kicks down the middle. Case in point: Then-USWNT keeper Hope Solo failed to dive to a side on a Sweden penalty kick that went to the right and knocked the U.S. out in the quarterfinals of the 2016 Olympics. 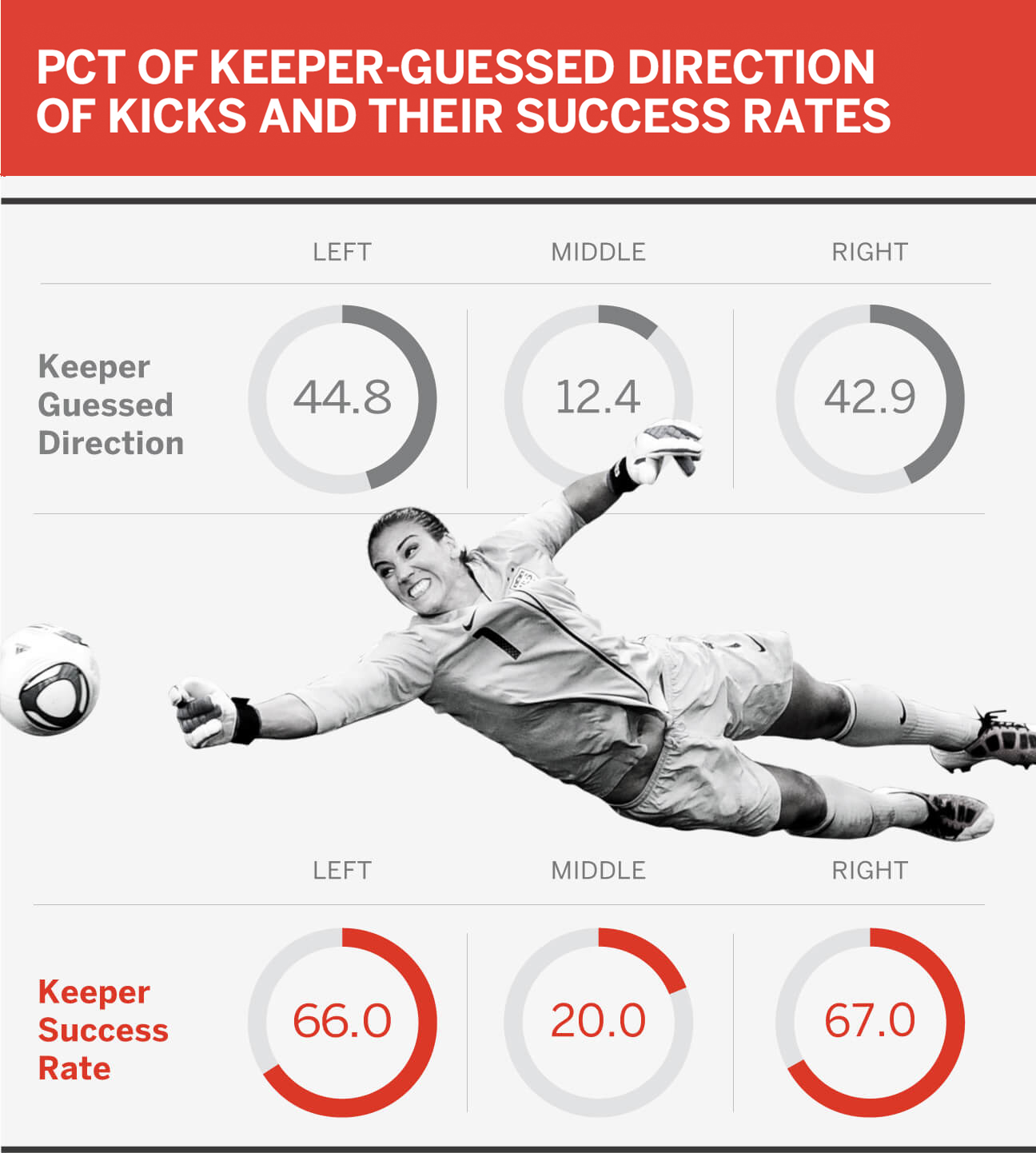 However, you don't usually have to worry about left-footers, unless you're facing Brazil. Only 19% of shootout shots have come with the left foot, but Brazil have taken 52% of their shootout shots from that stance in World Cups or Olympics. Another left-footed shot you might remember would be Brandi Chastain's Cup-clinching goal for the United States against China in 1999.

Don't cut the corners: It should shock absolutely no one that players should aim for the corners, which is where 71% of kicks have gone. Kicks to one of the four corners have a success rate of 80% because you're aiming them to where the keeper would have the absolute longest distance to catch up. Most shooters, though, keep it low rather than elevating it. The two most common spots are low left (29%) and low right (19%).

Familiar with the shootout? The United States and Brazil have each gone to the shootout four times, the most by any team, including against each other in 2011. They could face one another again in the quarterfinals in France. Carli Lloyd (USWNT) and Marta (Brazil) have competed in three shootouts, the most of any players.