Cristiano Ronaldo scored his first Serie A hat trick for Juventus on Monday -- the TENTH different competition in which he's scored three goals in a game. Here's our pick of the best from each one...

Jump to: Sterling laughs off blow to head in training mishap | FIFA stages legends match in front of pyramids in Egypt

Cristiano Ronaldo went gallivanting past yet another incredible milestone on Monday by scoring three times in Juventus' 4-0 win over Cagliari (stream the replay on ESPN+ in the U.S.).

With that, Ronaldo joins Alexis Sanchez as the only two players to have scored hat tricks in Serie A, Premier League and La Liga since the turn of the millennium.

In notching his 56th senior hat trick for club and country (for the record, Lionel Messi has 53 career trebles), Ronaldo also became the very first Portuguese player to score a hat trick in the Italian top flight.

Not a bad track record, all things considered, though there is one missing -- the UEFA European Championship finals (stream Euro 2020 LIVE in the U.S. on ESPN networks).

Here's our pick of Ronaldo's best hat tricks from each respective competition.

Seeing as Ronaldo has only scored one hat trick in Italy thus far, picking a favourite isn't too difficult.

Ronaldo only scored one hat trick in the Premier League, too -- the first of his career -- as part of Manchester United's hefty 6-0 demolition of Newcastle back in 2008.

In what proved to be a dominant 2011-12 season, Real crushed city rivals Atletico at the Vicente Calderon during their title run-in as Ronaldo pitched in with a 35-yard free kick, an angled 20-yard drive and a cute penalty. 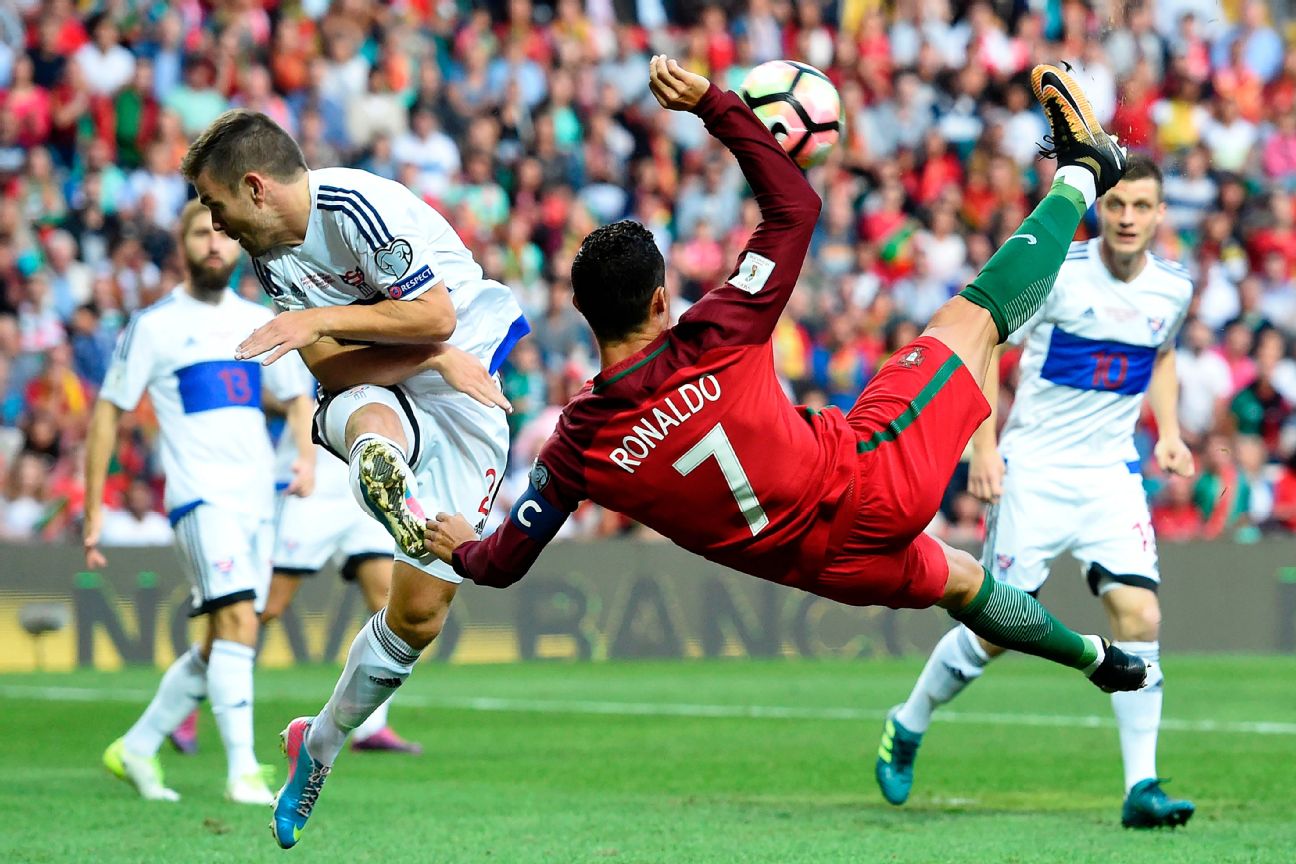 Beginning with an acrobatic scissor kick, Ronaldo's hat trick against the Faroe Islands in 2017 was lent added significance by the fact it saw him overtake Brazil legend Pele in terms of international goals.

By the end of 2019, Lithuania were thoroughly sick of the sight of Ronaldo, as the Portugal talisman scored seven goals in two games against them just 65 days apart. The last of these goals was his 98th international strike -- he enters 2020 on 99 for his country. It was also in Euro 2020 qualifying when Ronaldo scored the 700th goal of his senior career, putting him in a very exclusive club that includes some of the game's greats..

Again, Ronaldo only has one Club World Cup hat trick to his name so far -- scored against Japanese side Kashima Antlers in the 2016 final -- but it was another decisive treble, as Madrid's Japanese opponents took a shocking 2-1 lead just after half-time before Ronaldo netted a penalty to send the game to extra time, when he scored twice more.

If you're going to score a hat trick for Portugal at a World Cup, you may as well do it as part of an incredibly dramatic 3-3 draw against Spain in 2018 -- and draw level with the great Ferenc Puskas for the most international goals by a European player in the process.

Ronaldo has only made two appearances in the Nations League and still managed to score a hat trick, against Switzerland in the 2019 semifinals.

Perhaps Ronaldo's most famous hat trick of all was his classy one-man dismantling of Atletico Madrid at the Bernabeu in the 2016-17 semifinals -- the seventh Champions League hat trick of his career.

Sterling laughs off blow to head in training mishap

Raheem Sterling suffered a slightly embarrassing mishap at training this week when he was accidentally floored by one of his teammates.

Stationed in goal, the Manchester City star was jogging to fetch a wayward shot when a rogue ball dropped from the sky and hit him directly on the head, knocking him down.

Thankfully, Sterling was able to laugh at his misfortune and even share it on social media for the world to see.

"And they say I always dive," he joked, adding the hashtag "#NoVarNeeded" for good measure.

FIFA stages legends match in front of pyramids in Egypt

📺Watch the second half of world and African legends in action here: https://t.co/dCW6YsXLI2#CAFAwards2019 pic.twitter.com/QJq9SB8BdU

To say that the FIFA exhibition match between World and African legends is taking place with a picturesque backdrop would be something of an understatement.

Indeed, the friendly is actually taking place in the shadow of one of the wonders of the world, namely the ancient pyramids at Giza.

The match, staged by CAF to herald the greatest players in African football, is taking place on the southwestern outskirts of Egyptian capital Cairo.