<
>
Premier League team of the decade - as voted by you
2yESPN
Dest, Depay and Gavi shine for Barca; Ansu Fati scores on return
4hSam Marsden
Neither Arsenal nor Spurs are where they want to be. Only one looks capable of climbing out of their hole
1hJames Olley
Arsenal pile misery on Spurs with derby win
2h
Ansu nets in first Barcelona match for 10 months
4h
Fernandes vows to come back stronger after miss
9hReuters
Nuno: I made bad decisions in Arsenal loss
1hJames Olley
Juve beat Samp; Dybala to miss UCL vs. Chelsea
6h
Jimenez back on scoresheet as Wolves win
4h
LIVE Transfer Talk: Chelsea, Liverpool, Bayern circle for Juve's Chiesa
3hESPN
Man United slump and mounting injuries a worrying trend for Solskjaer
1dRob Dawson
Jesus wins battle of strikers over Lukaku in key Man City win
1dMark Ogden
David Alaba superb, Real Madrid struggle vs. Villarreal in goalless draw
23hAlex Kirkland
'I bet Messi never has to deal with this' - De Roon can't give shirts away
2dChris Wright
Jan 1, 2020

We asked you which Premier League players were the best since 2010? And you answered.

We broke down each position to make a 4-3-3 formation of the best that the English top flight has had to offer over the past 10 years. There were been some tough calls (sorry, Paul Scholes and Dimitar Berbatov), but we whittled the list down to the cream of the crop and gave you a chance to vote for your favourite.

Not every player was around for the full decade, but this is how you voted. 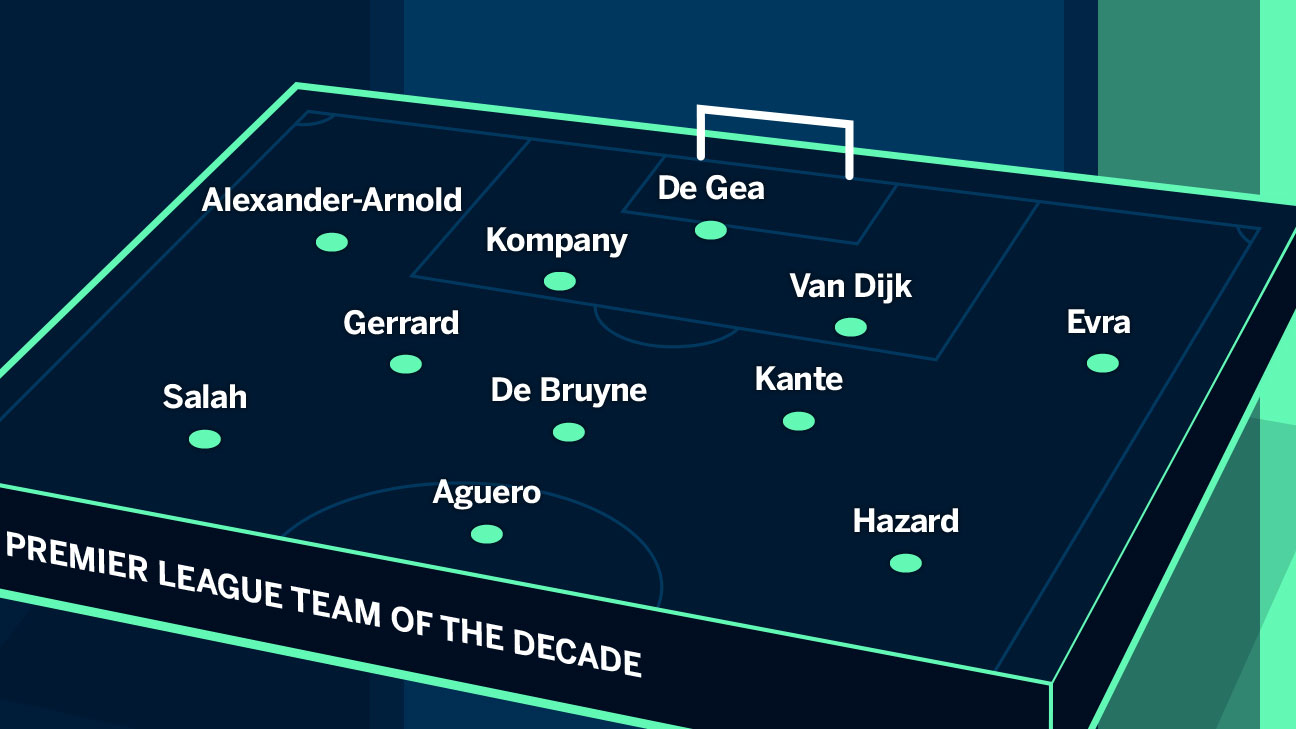 Our voters cast the likes of Pablo Zabaleta (11%) and Branislav Ivanovic (16%) to history and voted for Trent Alexander-Arnold with a commanding 40%.

The new generation took top spot with Liverpool's Virgil van Dijk having 39% but ex-Man City defender Vincent Kompany also made the team with 20%. Nemanja Vidic and John Terry were tied for third on 15%.

N'Golo Kante led the way for his work at Leicester and Chelsea with 61%, while Fernandinho (15%) and Michael Carrick (13%) were close to second.

Liverpool's Steven Gerrard was the top choice with 47% of the vote, way ahead of Man City's Yaya Toure (19%) and Chelsea's Frank Lampard (17%).

No issues here, with De Bruyne walking away with 55% of the vote and Wayne Rooney a distant second with 28%.

Finally, despite his history of award snubs, Man City's Sergio Aguero walks away with the prize. He netted 43% of the vote which was a landslide as Luis Suarez had 16% in second place.

Arguably the greatest manager of all time, Fergie landed 32% of the vote despite him retiring in 2013. Current leading lights Jurgen Klopp (31%) and Pep Guardiola (22%) came very close but not close enough.